By Greg McMillan and the Board of Directors of the Deschutes River Alliance, to especially include Cam Groner and Rick Hafele

In the words of DRA board member John Hazel, “It’s been a rugged summer.”  He’s right.  Drought, fire, smoke, warm water temperatures, fish die-offs, and fishing closures have all plagued the lower Deschutes River this year.  Now we have a new problem.  As if the lower Deschutes hasn’t had enough problems already.

Starting two weeks ago we started receiving emails and phone calls about a free-floating, green filamentous algae being present in the river.  It was draping itself in clumps over flies, knots in fishing lines, lures, side-planers and anchor lines on boats.  Shortly after that we started hearing from individuals with pumps in the river for domestic and irrigation withdrawals.  The algae was clogging the screens on their pumps.  Next we heard that the water pump at the fish counting station at Sherars Falls was suffering from the same problem with clogged screens.   The impact to irrigation pumps has resulted in screens having to be cleaned several times a day.  This puts very expensive pumps at risk of serious damage.

The potential economic consequences of this are hard to estimate, but it does have an impact.  Anglers are already avoiding the lower Deschutes due to warm water, a slippery river bottom, lack of aquatic insect hatches and turbidity from White River.  This impacts guides, outfitters and other businesses dependent upon the angling economy.

For those with pumps in the river, the cost of a damaged pump, labor to clean screens, or an outright inability to irrigate would be damaging to their incomes.  These incomes pay the tax dollars that support Wasco County and the Maupin School District.

These stringy looking dark green algae have been presumptively identified as Cladophora, with possibly some Anabaena mixed in.  Cladophora has been observed in the lower Deschutes River for a long time.  But never in quantities like are being observed now.

The peak time for growth of Cladophora is typically late spring and early summer, although it can undergo a growth spurt in fall as decomposing organic matter provides nutrients to stimulate its biological activity.

Cladophora is widespread globally.  Cladophora blooms in the Great Lakes are legendarily bad and have created major environmental problems including fish die-offs.  This happens when the Cladophora dies and starts to decay, using up oxygen in the water and creating low oxygen conditions for fish and other aquatic organisms.  We are not likely to see fish die-offs due to Cladophora in the lower Deschutes as long as the flowing water in the river helps keep oxygen at adequate levels.

The growth of Cladophora has probably reached its peak in the lower Deschutes River, as well as its maximum life expectancy.  It is now detaching from the substrate in the river and floating off in the current for the last of its short life.

Why So Much Cladophora Now?

Cladophora blooms like we are seeing in the lower Deschutes River are invariably the consequence of an increased nutrient load in the river.  The nutrients are nitrogen and phosphorous.  Warm water helps fuel the growth of Cladophora.

This summer has been very warm, even downright hot at times.  Temperature management at the Pelton-Round Butte Dam Complex has used large amounts of surface water to increase dam discharge water temperatures in accordance with the Without Project Temperature (WPT, and previously called Natural Thermal Potential) model utilized by the dam owner/operators (Portland General Electric and The Confederated Tribes of the Warm Springs Reservation). In a recent blog post we described how this model works and how it results in the harmful warming of the lower river during times of warmer air temperatures.

During our fieldwork in Lake Billy Chinook this year, we’ve been seeking to determine how dam operations have altered the nutrient load in the lower Deschutes.  We’ve found that of the three tributaries, the Crooked River has the highest nutrient load, while the Metolius River has the lowest.  The Metolius, in our sampling, has had no detectable nitrogen based nutrients.

The Metolius River enters the reservoir and then flows into the forebay of the dam at depths approaching 350 feet.  The Crooked River enters the forebay at about 120 feet of depth (the Middle Deschutes enters the Crooked River Arm about ½ mile south of the forebay).  The result is that the combined Crooked and Middle Deschutes River water sits on top of the Metolius River water during warm months.  Once the lake cools in mid- to late fall, the lake begins to “turn over” or mix. 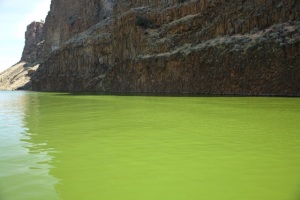 Here is what the surface water looks like in the forebay of Round Butte Dam during summer:

By mid-summer the algae in the reservoir have used much of the nutrients for their own growth, but through spring and early summer that nutrient laden water is discharged into the lower river.   The result is more rapid algal growth.  And not just with Cladophora, but also with the stalked diatoms we’ve been documenting in the lower river that have contributed to the decline of aquatic insects.

Prior to the completion of the Surface Water Withdrawal Tower at Round Butte Dam in 2009, Metolius River water made up the bulk of the water drawn from the reservoir for power production.  We didn’t have these problems in the lower river prior to operation of the SWW Tower.

We are certain that these consequences of surface water withdrawal were not intended in the design and implementation of the Selective Water Withdrawal program that attempted to provide currents in the reservoir for juvenile fish migration.

It has been demonstrated in cases of other Cladophora blooms that controlling nutrient load reduces or eliminates the problem.  That can be done in this case.  And should be done by reducing the amount of warm, nutrient-laden surface water being discharged into the lower Deschutes.  Nuisance algae problems have been increasing annually since the initiation of surface water withdrawal at Round Butte Dam.

We need to develop the political will to push PGE to alter dam operations in a fashion that eliminates the nutrient loading of the lower Deschutes River.  This is possible now with the adaptive management language in the dam operating license.

We also need the Oregon Department of Environmental Quality to stop ignoring the ongoing violations of water quality standards in the lower Deschutes River.  This will require in-depth water quality studies that could take years to get done.  So it needs to start now.  This is the long-term remedy to the algae problems in the lower Deschutes River.