For the fifth summer in a row, the Oregon Health Authority (OHA) issued a Recreational Use Advisory for Lake Billy Chinook (LBC) related to toxin-producing harmful algal blooms, or HABs. Despite this unfortunate anniversary, OHA opted to issue a season-long advisory unrelated to either a specific bloom’s presence or any testing or data that confirms toxic conditions in Lake Billy Chinook. For OHA’s explanation of this new type of advisory, please see its original advisory: https://www.oregon.gov/oha/ERD/Pages/2019-Precautionary-Seasonal-Recreational-Health-Advisory-Lake-Billy-Chinook.aspx.

In the face of annual recurrences, DRA strongly urges OHA to increase monitoring at LBC to better react and respond to the growing problem and to return to bloom-specific advisories that better advise the public of the actual conditions at Lake Billy Chinook.

Since 2004, OHA has issued HAB-related health advisories for Oregon’s freshwater bodies. These alert the public to cyanotoxins’ presence in specific water bodies – a warning to stay out. OHA issues a health advisory when cyanotoxin levels rise above the safe level for recreation. With each advisory, a monitoring, surveillance, and testing program for the specific bloom begins. Once the requisite number of tests return safe levels, OHA lifts the advisory and recreation can safely resume. Even after lifting the advisory, water monitoring samples continues until the bloom is physically gone.

Lake Billy Chinook is no stranger to these HABs or advisories. OHA issued its first advisory for LBC in 2015. Since then, LBC has seen at least one advisory each summer. In the short span of five summers, LBC has shifted from minimally impacted to facing annual blooms. 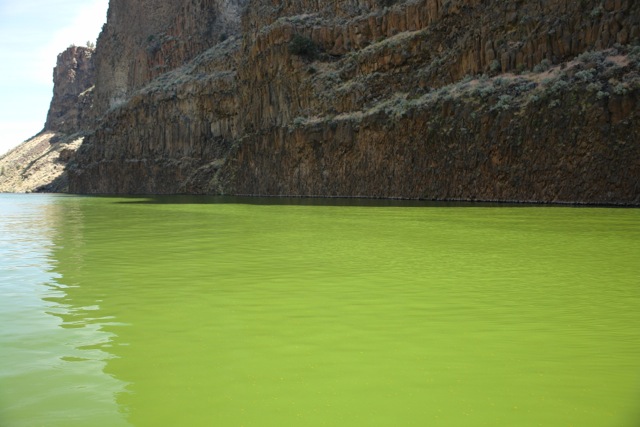 This year’s Lake Billy Chinook advisory, issued on June 11, stayed in effect until November 1. Dubbed a “Precautionary Seasonal Recreational Use Health Advisory,” this advisory differed from the previous four advisories posted for the Lake and from almost all other HAB advisories throughout Oregon. Except for the South Umpqua River advisory, which is permanently in place, LBC’s season-long advisory is an entirely new approach to warning the public. Rather than providing advisories supported by monitoring and testing data, this new style of advisory only warns of potential HABs throughout the season. Though OHA published “reminders” in July, August, and late September, they only echoed the first warning without offering any new information or data. And despite its own admission in both mid-August and late September that it knows of no toxic HABs in the lake, OHA maintains the advisory.

By issuing a seasonal precautionary advisory, HAB response at Lake Billy Chinook seemed to be in a holding pattern. Without continuous or even intermittent monitoring required, LBC had the ‘potentially unfit for recreation’ status for its entire summer recreation period. Despite the increasing frequency, OHA’s choice to issue the seasonal advisory results in almost no monitoring. Because an advisory is already in place, no bloom monitoring or testing is required to confirm the need for an advisory. Likewise, with the advisory in place until November 1, presumably no testing to track a bloom or to lift the advisory took place. Instead, Lake Billy Chinook sat by idly, recreation restricted, blooms untested, the problem largely unaddressed – with the public left wondering whether the water was actually toxic or not.

OHA’s lackluster response to the growing HAB problem at Lake Billy Chinook has serious repercussions. The first of these is to recreation at LBC. Without specific information, tourists and recreators could have relied on this advisory and foregone recreation at LBC altogether, with potentially significant impacts on the local economy. With many other recreation locations in Oregon, tourists could easily move their plans, and their business, elsewhere. All this because of the seasonal advisory that was not supported by data and without actual knowledge of a HAB in LBC.

In addition to the recreational and local economic impacts, OHA risks losing any meaning behind their HAB advisory. If OHA issues seasonal advisories as a matter of form without any supporting evidence, it will lose its significance to the public. This could lead both tourists and locals to either ignore the warning (and risk using what in fact are the actually dangerous waters) or to leave LBC behind (when in fact the danger has passed) in favor of other water bodies. Both are bad options. And both can be avoided by returning to the previous method of monitoring and advising. Already in this first year, the advisory seemed to be ineffective. Between the lack of signage, lack of clarity in the warning, and ineffective communication, many recreators were unaware of LBC’s advisory status over the Labor Day weekend. There really is no other reasonable policy option: OHA should abandon the seasonal advisory approach in order to protect the public.

While this post has focused on Lake Billy Chinook, the impacts reach beyond its boundaries. As the upstream source of water for the lower Deschutes River, the HABs in LBC are passed through the Selective Water Withdraw Tower at the Round Butte Dam. As noted in our previous reports, the lower Deschutes River already faces detrimental effects from the surface water release from Lake Billy Chinook. Migrating salmon and trout, along with downstream users, face yet another hurdle from these toxic blooms. HAB monitoring in Lake Billy Chinook, therefore, is needed for multiple reasons. Actual timely data about the blooms, and the presence of cyanotoxin, will help us understand the scope of the problem, provide more accurate warnings to protect human health, and encourage reasonable action in the public interest.