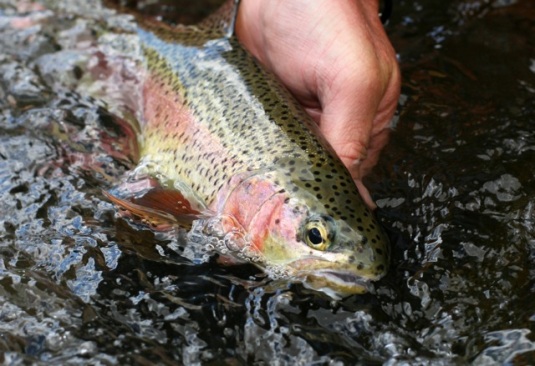 Last week Steve Pribyl, retired ODFW biologist on the lower Deschutes River and DRA board member, sent a letter to ODFW Director Curt Melcher and to each member of the Oregon Fish and Wildlife Commission. The letter responds to recent ODFW assertions regarding the health and abundance of the lower Deschutes River redband trout population. Steve points out several critical misstatements from the agency that misrepresent the results of recent ODFW resident trout surveys. That letter can be read here.

As a brief summary, ODFW has performed electrofishing on the lower Deschutes River each April from 2014-2017 to capture and measure redband trout. After this year’s survey, an ODFW Field Report claimed there “is no indication the population has been adversely effected [sic]” by Selective Water Withdrawal operations, and that “Deschutes redband appeared to be in good abundance based on how easily [sic] they were to catch during this year’s monitoring.” SWW supporters have taken these statements and cited them repeatedly as evidence that the lower Deschutes redband trout population is as healthy and abundant as ever.

Obviously, we are all hopeful that the redband trout population below Pelton-Round Butte is healthy and abundant. However, as Steve explains, there is simply no way to know this based on the ODFW surveys performed to this point. These surveys have all been conducted to collect information on a few metrics, on a limited sample of trout, in only a few locations, at one point in time. This sampling is not designed to, nor is it capable of, estimating trout abundance and overall population health in the 100 miles of the lower Deschutes River. In fact, a 2016 ODFW field report specifically qualified the ability of these studies to assess trout abundance, stating “Abundance will not be evaluated due to the difficulty of accurately estimating trout abundance in large productive rivers like the Deschutes.”

Steve spent 20 years of his 30-year ODFW career on the lower Deschutes River, and performed many of the surveys that ODFW now claims to be “replicating.” In his view, ODFW’s statements on trout population health and abundance are extremely misleading, and are simply not supported by the survey data collected. We are disappointed that ODFW is making such unsupported statements, which are now being repeated by various Deschutes Basin stakeholders. And it is unfortunate that ODFW has not implemented adequate pre- and post-Selective Water Withdrawal monitoring studies to truly evaluate the population health of redband trout in the lower Deschutes River.

It is also unfortunate that such detailed studies were not mandated during the Pelton-Round Butte FERC relicensing process. At that time, ODFW had the authority to recommend various licensing conditions related to fish and wildlife. The agency did in fact recommend several such conditions, which were largely incorporated into the final FERC license. However, ODFW did not recommend that the licensees (PGE and the Confederated Tribes of Warm Springs) perform any type of baseline redband trout monitoring in the lower river, or any post-SWW follow-up monitoring to assess changes in population health and abundance below the Project. This was a missed opportunity: rather than requiring the licensees to monitor and assess redband health populations, any such studies must now be funded and performed by ODFW. The redband studies performed so far seem designed to minimize cost and staff time, rather than to make detailed, accurate assessments about the trout population.

We think it is also worth mentioning that in ODFW’s post-SWW reports on redband trout health, the agency has failed to mention the black spot disease epidemic currently being observed in the lower river. Any discussion of fish health in the lower Deschutes River right now must include the infections being regularly observed in caught fish. Given the high numbers of Black Spot-infected fish observed by anglers these last two years, it is highly unlikely that ODFW has failed to observe the disease in their surveys.

The ventral surface of a redband trout with black spot disease, caught in the lower Deschutes River in late April 2017. Photo by Jamey Mitchell.

In sum, it seems that native redband trout in the lower river have become a lower priority for the management agencies—and the Pelton-Round Butte licensees—than the salmon and steelhead being planted above the Project. This is truly unfortunate, as the lower river trout population is an incredible native resident resource, and much of the year is what draws anglers and others to the lower Deschutes River.

We urge you to read Steve’s letter.